Trying out a blazer pattern ❤️ 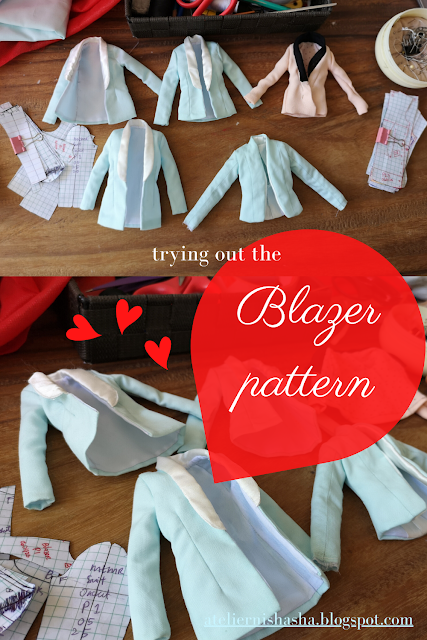 I hope everything is peaceful at your side of the globe. There's so much going on around, but despite that I wish you are hanging in there. At least that is what I am trying to do :) Things are okay here in my town, family is doing well, and thankfully, I am still able to do the things I love. I wish you the best as always.

Last month, I committed to creating a pattern set for a suit (blazer jacket and skirt) for a Made to Move Classic/Regular Barbie. I've never done one before, so it was both exciting and a bit scary ;D Well, basically, it's a giveaway prize at a facebook group I am hosting. I started late with this project/commitment than planned because I had backlog work, which was mainly another prize giveaway. Until now, I am still bad at resource management; it's annoying. But what can I do? My real, ultimate talent is putting as much on my plate without checking my previous commitments. I know, right? Sigh...

But anyways, here I am still trying to keep up with my uber-driven self.

So I had been drafting several blazer patterns for the last two weeks, I think, and have managed to prototype five. To be honest, I was just like on cloud 9 making each one of these, learning my way as I go. I started documenting my changes only later in the entire project, but I'll try to remember and list the things I learned so far. Who knows? Someone new to this miniature fashion design venture might just, in the future, find this post useful. 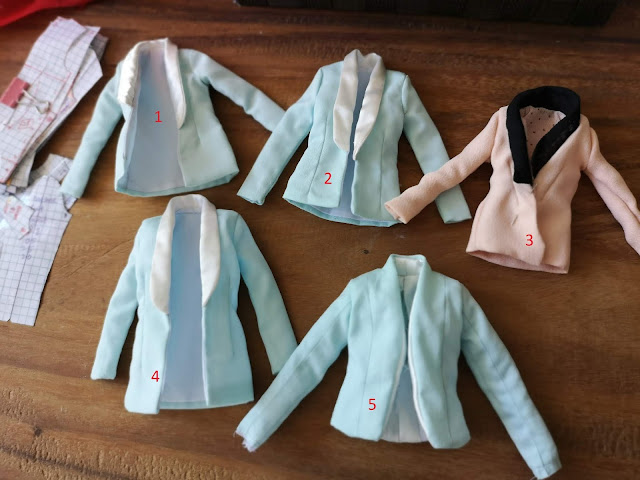 Adapting a similar pattern to create a new one

So I started my first prototype with a pattern I adapted from my existing shift dress pattern. I thought that the shape of the sleeve hole will look nice on a blazer, too. I added some ease, changed the neckline, created a center front, added some sleeve length, among other tiny changes here and there.

This step is rather different from my usual. What works for me is draping a piece of clothing or sturdy kitchen paper on the doll, then fold darts and draw lines to get the shape I want. But since this garment is an outerwear and does not require to fit the body shape, I thought I really need to draft based on measurements.

Here's pretty much my muslin/toile/pre-prototype of sorts, complete with the shawl collar/lapel.


Since I liked the way the muslin draped on the doll's body, I proceeded with some fabrics I thought would be perfect for the blazer. I chose all woven fabrics, in light colors. The main fabric is an italian cotton shirting, the lining is gina silk and the lapel I believe is charmeuse.

I remember being happy about it, except that I became ambitious and wanted to add darts at the back. I didn't put any at first because I wanted it to be a loose, relaxed blazer. But somehow, I changed my mind and went on to update it and added some back darts.

So, up next is the third pattern alteration, but using a different set of fabrics. Turns out, the design does not call for them.

So, from the third pattern, I created something that has a longer hem, wider chest, longer darts I believe.


Actually, I was really happy with this version. There are only very tiny things to tweak.


But then again as I was browsing through social media, I stumbled upon the really awesome works of Instagram's @dolldressmaker. I'm a fan of this talented young man and I was so inspired to see his latest Homme suits. I thought, maybe I could try making a simpler version for my girls, too? He's on facebook, too and posts his works at the Facebook crafting group, Barbie Sewing Club.

I didn't know how I fell into yet another black hole of curiosity, but yeah I then watched a lot of youtube videos on how to make blazers. But among the many hours spent curling up in a corner, absorbing as much info as I can, my favorites are the ones from Dami Dimension. I love this girl; such a beauty, very talented, and super generous of her knowledge. This video teaches you how to draft your  own blazer pattern:


and this one below, is for constructing/sewing the garment.


The blazer she made for herself is just gorgeous, isn't it?

So, I did try it on my MtM gal. And like how I feared it to be, human-based patterns almost always look too bulky on our sixth-scale fashionistas.

But, despite the outcome, I was more than happy to have tried making it! I've learned so much for this fifth pattern I drafted.


So, yeah.. I know I detoured, but like most detours I do with my work at atelierniSHASHA, it's always a blissful one:D

After having collected so much learning from the past two weeks, I am again very excited to draft the next pattern. My sixth pattern, which I did earlier this morning, will be an alteration of the fourth one, with again small changes here and there.

It still may not be the one I will use as the giveaway prize, but I know for sure that the process is going to be all worth it. Like they say, the path is the goal. When you realize that it is the daily things that you really live for, not the by-products, which by the way, are simply nice-to-haves, life is so much lovelier.

Enjoy the rest of the weekend, dollings and thanks so much for reading through my messy collection of thoughts again. 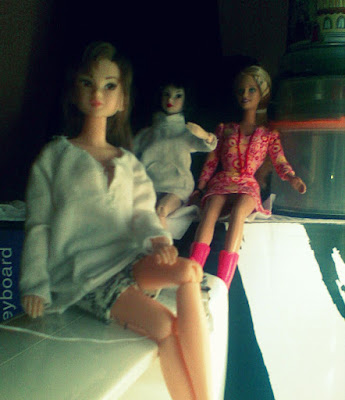 Check out my work around the Internet!

Shasha
miniatures have amused me since childhood so i started collecting dolls, making their clothes and accessories and decorating their place at a very young age. fancy? let's see where this brings me (and you) :)